From May 29 to 30, the 1st ENCoR CIDREE expert meeting took place in Lyon, France. It was hosted by the French Institute of Education, which is part of the Lyon Ecole Normale Supérieure (ENS). Key figures: 3 CIDREE members (FR, HUN, LUX). Unfortunately, the CIDREE expert from Ireland was unable to attend the meeting due to travel problems.

This 1st CIDREE meeting aimed at identifying European networks or programmes fostering collaborative research that brings together educational actors and researchers.  On top of the participants representing the CIDREE, three colleagues, two from Equator and one from Lebanon, contributed to the exchanges.

On the 1st day, Aminath Afif from Luxembourg presented the MathemaTIC project strongly supported by the Ministry of Education. For this project, which aimed at designing a platform for the teaching and learning of mathematics in several languages for students aged 9 to 10, the Ministry representatives worked in narrow collaboration with Luxembourg teachers and researchers, a Canadian company specialized in designing learning activities on line and a division from the French Ministry (DEPP). Marton Bodo from Hungary described examples of participative research in his country as well as an investigation conducted by the Institute for Educational Research and Development on a new community service program that is compulsory for secondary students. Brigitte Gruson and Réjane Monod-Ansaldi presented the Associated educational Places (AeP, stands for “LéA: Lieux d’éducation Associés à l’IFE” in French) coordinated by the French Institute of Education. Finally, the end of this first day was devoted to a discussion about the favourable conditions to conduct collaborative research.

On the second day, Jean-Charles Chabanne presented the IFé international seminar whose scientific work focuses on collaborative research and the dissemination of research results. After that, Suzanne Abdul-Reda Abourjeili shared her experience in relation with 4 research action projects conducted in Lebanon. She also presented a project concerning the creation of AeP in Lebanon, which raised great interest among the participants. Adriana Rodriguez and Luis D’Aubeterre Alvarado from the Ecuadorian national university for education described the ambitious mission of that very new university that seeks to transform the school system and, beyond, the whole Ecuadorian society thanks to new collaborative practices.

In the afternoon, the participants of the CIDREE meeting attended a workshop organised in relation with the 7th national AeP conference. It gave them the opportunity to share experiences with members of 3 different AeP: Lycées Argentré-Macé, Collège Ampère and Réseau d’écoles en Bretagne.

At the end of the meeting, a synthesis of the exchanges was elaborated by the participants. This synthesis focuses, first, on the identification of the people involved in collaborative research in each country, second, on the identification of future possible collaborations. Two main possibilities were identified: the creation of a partnership between some AeP and collaborative projects on specific topics, the promotion of a partnership aiming at examining under which conditions the AeP network could be adapted to other national, political and cultural contexts.Catherine Pérotin, vice director ENS-IFE and 1st incoming CIDREE President participated in the final discussions and stressed the interest in carrying the work initiated during this meeting.

Next step: organisation of a second Expert Meeting involving other CIDREE members. 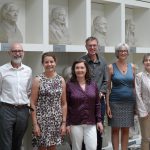